People’s exposure to environmental noise dropped nearly in half during the early months of the coronavirus pandemic, according to University of Michigan researchers who analyzed data from the Apple Hearing Study.

Researchers at U-M’s School of Public Health and Apple Inc. looked at noise exposure data from volunteer Apple Watch users in Florida, New York, California and Texas. The analysis, one of the largest to date, included more than a half million daily noise levels measured before and during the pandemic.

Daily average sound levels dropped approximately 3 decibels during the time that local governments made announcements about social distancing and issued stay-at-home orders in March and April, compared to January and February.

“That is a huge reduction in terms of exposure and it could have a great effect on people’s overall health outcomes over time,” said Rick Neitzel, associate professor of environmental health sciences at U-M’s School of Public Health. “The analysis demonstrates the utility of everyday use of digital devices in evaluating daily behaviors and exposures.”

The four states reviewed in this analysis had differing COVID-19 responses in terms of stay-at-home orders, which showed through the data.

“California and New York both had really drastic reductions in sound that happened very quickly, whereas Florida and Texas had somewhat less of a reduction,” Neitzel said.

Initially, the largest drop in environmental sound exposure was seen on the weekends, where nearly 100% of participants reduced their time spent above the 75 dBA threshold (a sound level roughly as loud as an alarm clock) between Friday and Sunday.

“But after the lockdowns, when people stopped physically going to work, the pattern became more opaque,” Neitzel said. “People’s daily routines were disrupted and we no longer saw a large distinction in exposures between the traditional five working days versus the weekend.”

Some technology companies have had the unique opportunity to help businesses of all sizes weather the coronavirus pandemic. And some of these tech stocks have thrived as people around the world spend more time at home than ever before.

Investors who are looking for a couple of investments that are tapping into the stay-at-home trend should consider snatching up shares of Zoom Video Communications (NASDAQ:ZM) and Limelight Networks (NASDAQ:LLNW). Here’s why these two stay-at-home tech stocks are worth considering right now. 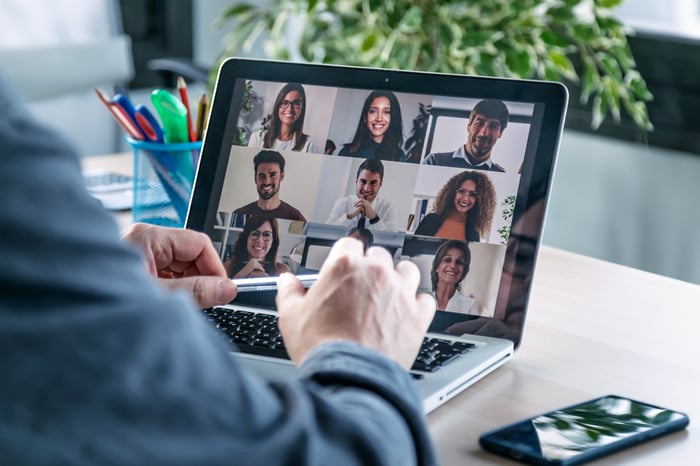 1. Zoom Video in on this investment opportunity

I was a bit skeptical about Zoom’s stock when it started gaining attention months ago as the U.S. lockdowns began. My hesitation was that there are plenty of other video communication tools available from tech heavyweights, so how could Zoom’s services beat them all?

Boy was I wrong. Zoom’s stock is up an astounding 611% so far this year, and the company’s revenue skyrocketed 355% in the second quarter. It’s clear now that Zoom’s customers really prefer its service compared to the long list of other options out there, and despite its already phenomenal growth, there could be more where that came from.

Video calling existed before the pandemic, of course, but now, Zoom calls have become a regular part of our lives for everyone from school teachers to CEOs. Even when the pandemic is behind us, it’s unlikely that Zoom’s video calls will fade away completely because it’s still a very efficient and inexpensive way to communicate with people.

For example, flying a salesperson across the country for just one business meeting isn’t going to be a normal thing to do any time soon. This means that Zoom’s video services will likely be an important business tool for years to come. And with COVID-19 cases